Legalize It Already: What It’s Like Living With Prohibition In The Age Of Legalization

The United States is unique. It’s difficult to think of another country where its states, cantons or provinces have their own sets of civil and criminal laws. There are some countries — Canada and Switzerland, for example — where cantons or provinces can create laws around issues such as education or whether to allow a pipeline to run through, but they can’t legalize something like abortion or cannabis if it’s not legal at the federal level.

But that’s not the case in the US, where each state can pass both civil and criminal laws without permission from the federal government. Of course, those laws can be — and have been — challenged by residents and citizens, which can get said challenges kicked up to the US Supreme Court for an ultimate decision. Once that happens, whatever the outcome, it becomes the law of the land.

Offering state leaders the option to create rules that apply only to that state may seem like an idea rooted in the freedom of choice, but in some cases, it’s more about making decisions based on ideology or politics.

There are several well-known examples throughout the 243-year history of the US in which one state had a law that differed from a neighboring state and, once ruled on by the Supreme Court, became the law throughout the country. Such examples include:

Using Kansas as an example, some of these landmark decisions, in which the dispute began in another state, in fact changed laws in the Sunflower State. Prior to some of the Supreme Court’s rulings, public schools were segregated, abortion was illegal, and people of different sexes and/or races couldn’t legally marry in Kansas.

With the exception of Nebraska to its north, cannabis is legal for at least medicinal use in every state that borders Kansas. This could change, as the newly elected governor favors the legalization of medical marijuana. In the meantime, Kansas remains one of just 17 prohibition states.

As more states and US territories admit that the war on drugs was a failure (or, perhaps after realizing they can get rich off the very thing for which they spent years incarcerating people of color), there seems to be more attention paid to the states that have legalized cannabis than to the states that are left behind.

Ever since Puerto Rico (where I live), legalized medical marijuana in 2015, I’ve spent less time thinking about the legal states and territories and more time feeling badly for people living in prohibition regions.

Mounting evidence continues to suggest that cannabis is effective at treating myriad health concerns, including but far from limited to:

It’s difficult to believe that there are any legitimate reasons for a state to not legalize cannabis for medicinal reasons — and by legitimate, I’m not counting monetary threats to Big Pharma and other “Big” industries. When weighing patient health against religion, politics and/or huge profits, I’ll always choose health.

Now that the number of states with some form of legal cannabis in place outnumbers prohibition states, we’re left to wonder: 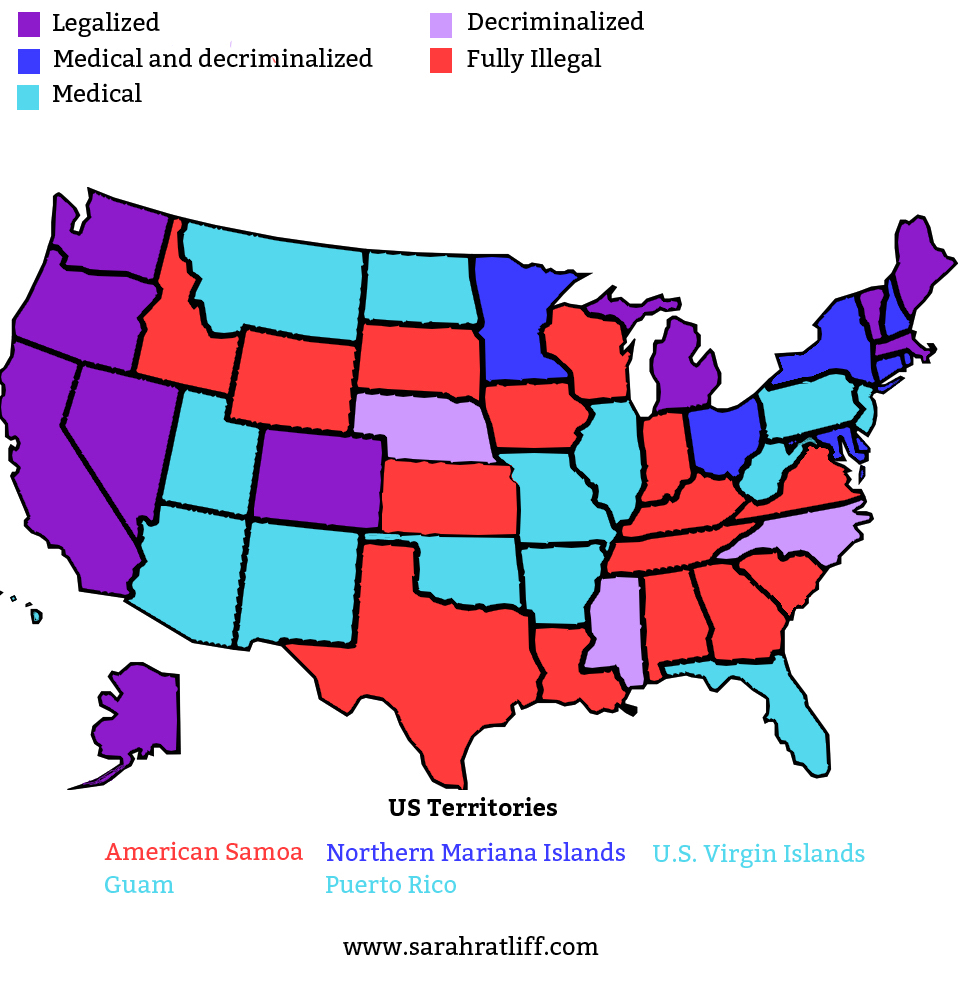 If the fate of cannabis goes by way of the aforementioned Supreme Court decisions, could it be one of these six people who turns the tide for everyone in the US and the one remaining territory where cannabis is not legal?

Note: In some instances, I’ve changed the names of the people interviewed.

Bethany lives in Texas, and cites the following reasons for the holdout on cannabis: “Texas is a Republican state, controlled at every level of the state government by the GOP. Our incarceration rates are greater than some foreign countries, and as the private prison lobby gives money to elected officials, they target people that make it easier to incarcerate more of the population. This practice is just a continuation of slavery, which is why black people are targeted for crimes and comprise a higher percentage of the population in prisons.

“The fact that Big Pharma is one of the biggest lobbies probably contributes to the decision to keep cannabis illegal.”

Bethany is a lifelong asthmatic who also has anxiety. She says of cannabis, “While I would not be able to smoke it, studies show that the anti-inflammatory properties of cannabis help clear inflamed bronchial passages and make breathing easier.”

Bethany worries that prescription and over-the-counter asthma medications eventually cause potential heart problems and high blood pressure. For someone with a family history of heart problems, this is a serious concern.

If given the opportunity to address her state’s leaders about medical cannabis, Bethany knows what she would say: “We are not children and can make decisions for ourselves. It’s criminal to keep cannabis illegal, because it perpetuates the pipeline-to-prison phenomenon, which also unfairly prosecutes black people over all others. Keeping cannabis illegal only does one thing: Continues the donations into [Big Pharma] coffers.”

Holly lives in Kansas, a conservative state. She suffers chronic back pain as well as extremely painful menstrual periods due to polycystic ovarian syndrome. “There was recently a ruling that stated, just smelling the smoke from cannabis means the cops can enter someone’s home. I’ve also known people who were arrested for having less than a gram and/or having a cannabis pipe on them.”

While living in Maine (prior to legalization there), she was prescribed a daily dose of 60 mg of Vicodin. Although this is within the suggested dosage, risk of addiction at that quantity is serious, and that much acetaminophen can destroy a patient’s liver. Holly wants the state of Kansas to “listen to your people and look at how other states have benefited from legalization — especially in the areas of funding education and opioid addiction and overdose.” Fortunately for Holly and others living in Kansas, newly elected Governor Laura Kelly is pro-cannabis, so it may not be a prohibition state for much longer.

Eric lives in Georgia, where he says, “The old guard believes the lies they started back in the 1930s. Publicly, it’s a gateway drug that leads to addiction to cocaine, heroin and other Schedule I narcotics. Historically, the white lawmakers were afraid their children would become addicted and consort with blacks and Mexicans.”

If it were easier to navigate the laws in his state, 62-year-old Eric would use medical cannabis for joint pain. He has friends who regularly consume cannabis to treat their own joint pain, and they report relief. Eric would also use it for anxiety, which occasionally arises. If given the chance, he’d tell his state politicians that they’re missing out on a lot of tax revenue, and Georgians who want it could benefit from using such cannabinoids as THC and CBD.

G.W. also lives in Texas. He is a disabled veteran who believes cannabis would be helpful for his degenerative disc disease and PTSD. He explains that bias is what keeps Texas from legalizing cannabis. “It’s mostly just a bias against anything new or different, a bias that tends to run in conservative states. It’s an absurd belief that cannabis will lead to heroin addiction and a rise in crime.”

He has a message to the conservatives in power: “Open your minds and understand how much better cannabis is on the body compared to pain pills. Many disabled vets would be better treated with cannabis instead of high-powered pain pills and prescription drugs for PTSD and depression.”

G.W. takes Oxycodone and 800 mg a day of Gabapentin, a nerve pain medication and anticonvulsant. He consumes cannabis, although not legally, and believes if there were no risk of getting caught, “it could replace those prescriptions entirely.”

Lucinda lives in South Carolina and has chronic pain from spinal arthritis. She has additional wear and tear on her body due to cerebral palsy and generalized anxiety disorder. She says that South Carolina claims to be in “support” of medical cannabis, but that there hasn’t been enough evidence presented to prove its benefits.

“I have an active prescription for opioid pain medication, in addition to other measures like physical therapy to help mitigate my pain.” If offered the opportunity, Lucinda would tell South Carolina’s political leaders, “If you’re so worried about the opioid epidemic, you need to provide people like me with chronic pain an alternative, instead of dooming us to a life of pain and decreased productivity.”

Scott lives in New York where medical cannabis is legal, although, he says, “While technically legal, the restrictions are so great that most physicians aren’t interested in prescribing it. For at least the first year or year and a half, only one private practitioner in my county bothered to prescribe it. I checked today and that number is up to about 30. … Still a small number compared to the number of providers in this county.”

Scott had knee replacement surgery about two years ago, and is in more pain today than he was before the surgery. Scott also suffers from insomnia, and he gets between zero and three hours of sleep a night. He was taking 600 mg of Ibuprofen three to four times a day, until he developed bleeding in his GI tract. Tylenol is ineffective for his pain, so he doesn’t bother. For days when his pain is so bad that he’s in tears, he takes one of his “stockpiled” Vicodin.

Will any of these six people get so frustrated that they take their fight as high as it will go? If you knew cannabis could be a safe and effective treatment for whatever ails you, how far would you go to fight for it?

This was originally published on Big Buds and is republished with permission.